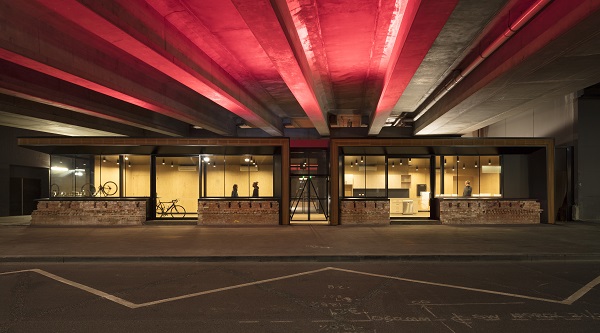 The lights have been switched on in Village Street, Docklands as part of an activation project conceived by Development Victoria and Walker Corporation to enhance the street lighting underneath the Collins Street bridge, and make the space more attractive for community, retailers and visitors.

This place-making joint venture was proposed in July 2017 to improve the ambience of the area for pedestrians who use Village Street to access Etihad Stadium, while highlighting a range of new retail “pods” located under Collins Square, such as Tribute Boxing.

Development Victoria’s General Manager Precincts, Simon Wilson, said Village Street underwent an upgrade last year which transformed it into a pedestrian-friendly precinct and this project was an extension of that.

“This is a busy area on weekdays, but we identified that it needed some activation to encourage visitors and residents at other times”, he said.

“Walker Corporation has attracted some great new businesses under the Collins Street Bridge and it will be great to be able to showcase them.

“This is a perfect example of collaboration with a developer to activate a space that has a lot of potential. The stadium end of Village Street has benefited from an upgrade so this is a natural extension.”

Melbourne-based specialty lighting firm Electrolight was engaged to design the installation, with Melbourne’s unique lane-ways the inspiration behind the lighting activation.

Walker Corporation shared Development Victoria’s vision to ensure the light activation was in place to celebrate the winter Firelight Festival in Docklands.

“Collins Square hosted a long-table dining experience at Chiara as part of the festival and the light installation served as another attraction for the thousands of visitors to what has become one of Australia’s most successful commercial and entertainment precincts,” Lang Walker, chairman of Walker Corporation, said.

“This has been a great opportunity to highlight this new hub of Melbourne, with Collins Square now almost complete and with its five commercial towers, two of which have reached a 5 star NABERS rating this year, featuring a variety of cafes, restaurants, bars and retail outlets.”

The light installation will be an ongoing feature of Village Street and consists of a spectrum of six colours, each colour holds for 15 seconds before a transition to the next colour. The lights run every day from 5:30am–7am and from 5:30pm–7pm.