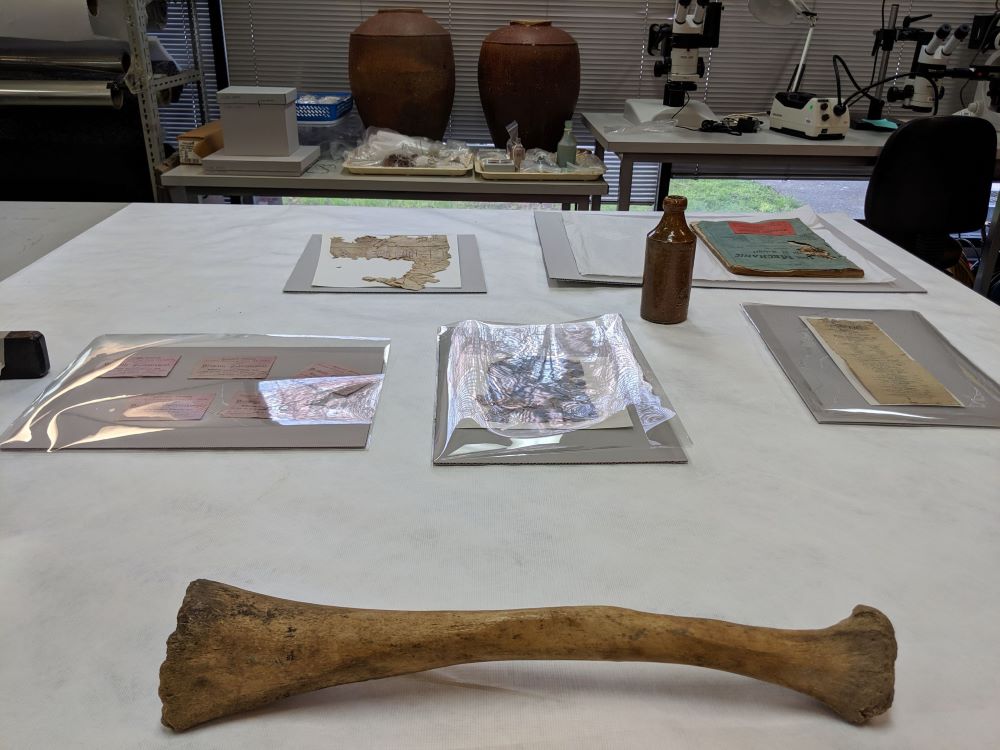 Geelong’s past and future have come together with the unearthing of an elephant bone among hundreds of buried historical objects during Geelong Arts Centre’s landmark redevelopment project.
Minister for Creative Industries Martin Foley visited the Heritage Victoria Artefact Centre to view the curious collection of items, which date from the mid-19th to mid-20th centuries, tracing the history of the site as the home of a church, a temperance hall and Mechanics’ Institute.

It was no ordinary day on site in May last year when construction crews made way for archaeologists after discovering the radius bone of a baby elephant amid yellowing newspapers, theatre tickets from the 1800s and a maths test.

Many items are believed to have been left behind by the Geelong Mechanics’ Institute, which stood on the site from the 1850s to 1940s. The Institute was an educational centre for Geelong’s working and affluent classes, and presented exhibitions and talks from across Australia and around the world.
The Arts Centre is now appealing to the public for any information or photos about how the elephant bone came to be on site.
Researchers believe it may have been part of an exhibition at the Mechanics’ Institute or a private collection, but there may be other explanations.
As part of the Ryrie Street redevelopment project, the Arts Centre will develop a display for its new foyer to showcase the found items and tell the story of the site’s rich history.
The $38.5 million Ryrie Street redevelopment will open later this year, and includes a striking new entrance and bar, four new studios and a creative industries workspace floor.
The next stage of the redevelopment, which will focus on the Little Malop Street side of the building, is supported by $128 million from the Victorian Government. Construction will start next year and be complete by 2023.
Development Victoria is partnering with Creative Victoria, Geelong Arts Centre and Regional Development Victoria to deliver the redevelopment.