The facade design artwork and new name for the Bendigo GovHub have now been revealed, marking a significant milestone for the project.

The new name for the building – Galkangu – [pron: gull-kang-gooh], a Dja Dja Wurrung word meaning “build together, we make together, make things happen together, more connected to Country.”

The artwork which will be featured on the building’s façade has also been revealed, featuring the shield of the Dja Dja Wurrung Traditional Owners.

The new name – Galkangu – and the beautiful artwork from Natasha Carter which will feature on the façade, are testament to the important collaborative role of the Dja Dja Wurrung in the design of new GovHub

The façade design was created by Dja Dja Wurrung, Yorta Yorta and Jaru artist Natasha Carter of Murrupuk Art. Its diamond pattern represents identity, protection, honour and the historic Recognition and Settlement Agreement of 2013 which formally acknowledged the Dja Dja Wurrung people as the Traditional Owners for Bendigo, and surrounding lands.

“It is such an exciting milestone for this project, to share the new name and design for the Bendigo GovHub, which recognises the cultural significance of these lands for the Dja Dja Wurrung Traditional Owners.” Said Penny Forrest, Group Head of Property Development for Development Victoria.

“The new name – Galkangu – and the beautiful artwork from Natasha Carter which will feature on the façade, are testament to the important collaborative role of the Dja Dja Wurrung in the design of new GovHub.”

Other meaningful Dja Dja Wurrung design elements will also feature throughout the building representing the coming together of knowledge systems and reconciliation.

The diamond pattern is a common motif of the Dja Dja Wurrung which is used to identify each other. They can be seen on both giramal (shields) as well as on coolamons and gani (digging sticks). The layers in the background of the artwork reference the six layers of Country and the six Seasons of Dja Dja Wurrung Country.

The background semi-circle pattern represents the People. The message is that people need to be in and a part of the landscape, and that the Djaara (Dja Dja Wurrung People) hold a deep connection to Djandak (Country) spanning many generations.

“Our symbols that are present in and around Galkangu will empower those serving the community and will be a significant step for those that live on Dja Dja Wurrung Country – together we will prosper.” Said Dja Dja Wurrung Group CEO, Rodney Carter.

The Bendigo GovHub is expected to be complete by late 2022, generating 200 new local jobs during construction and injecting an estimated $130 million into the local economy.

Up to 1,000 Victorian Government and City of Greater Bendigo employees will work at the state-of-the-art, flexible workspace providing a centrally located, one-stop-shop for government services to Bendigo. 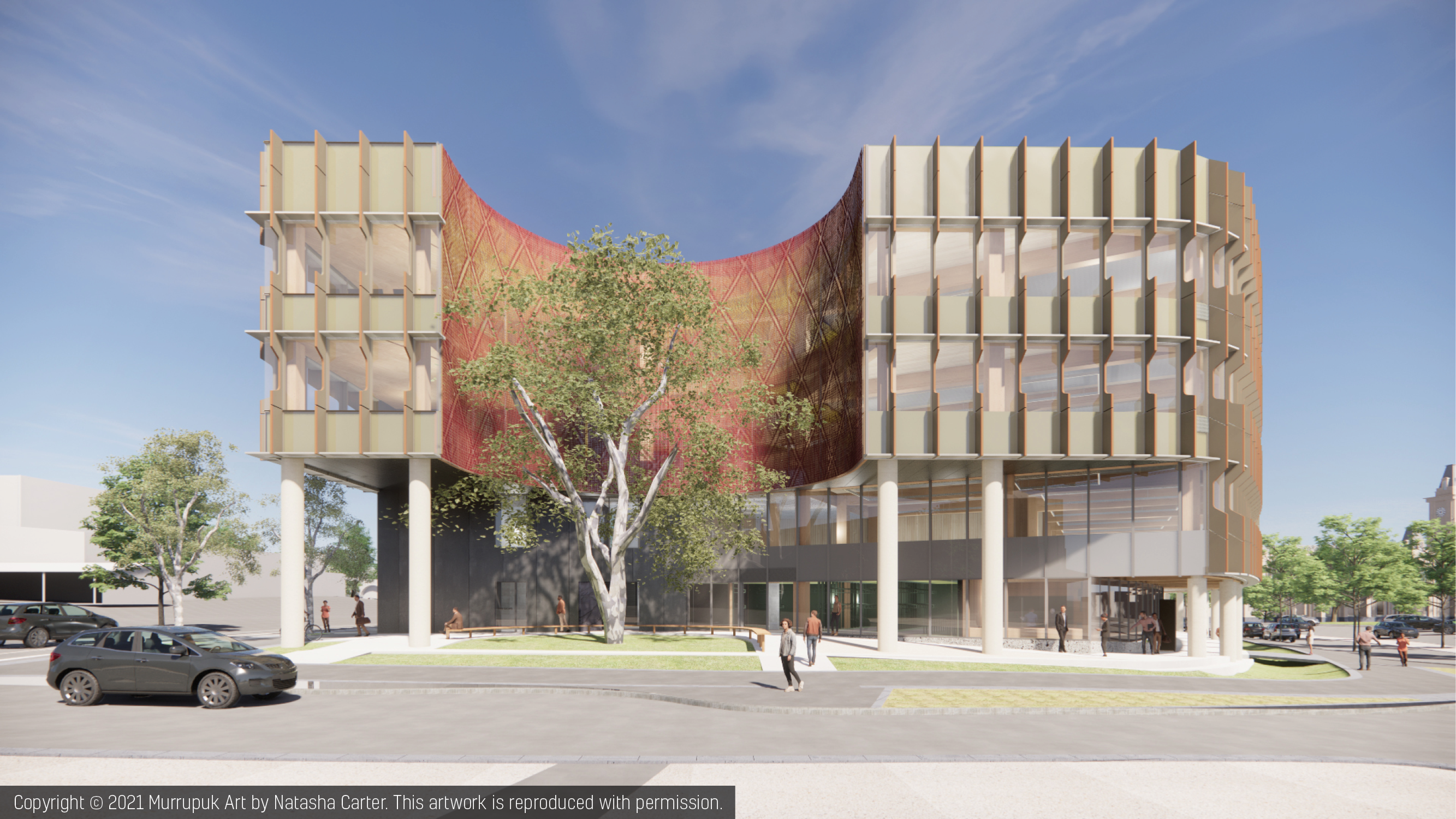 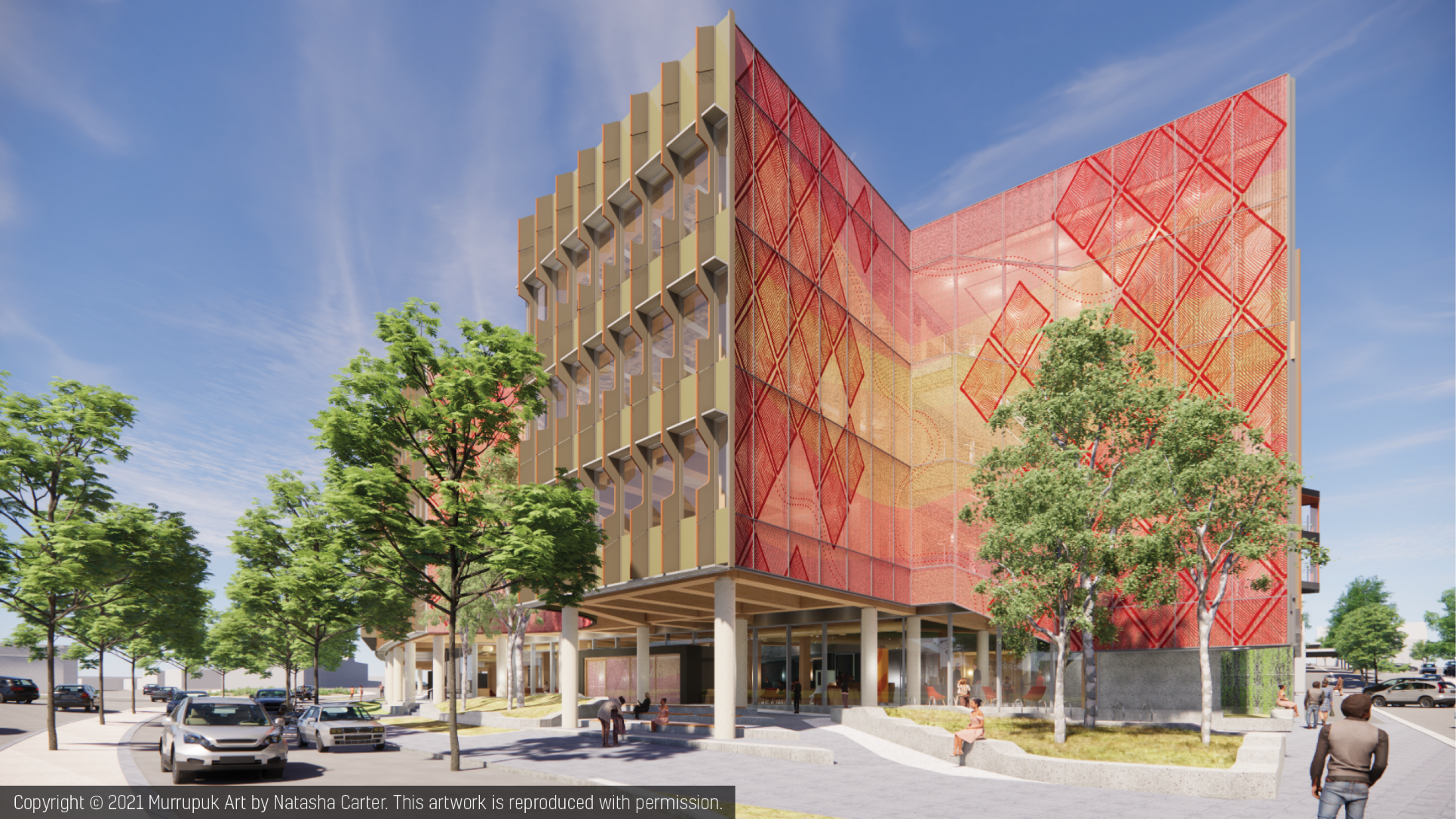