Next Generation Library Thrives in Docklands 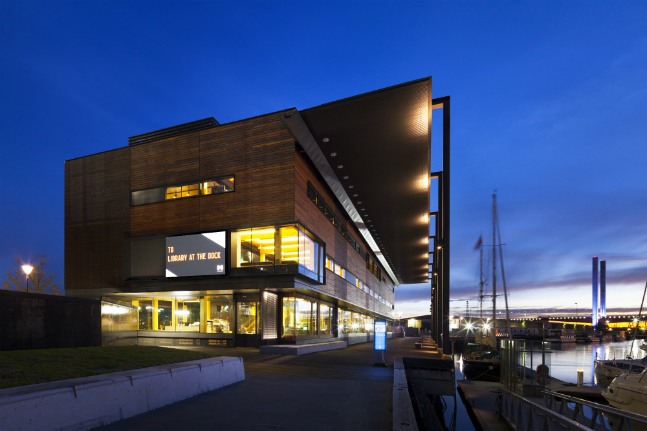 For many of us, libraries represent a time gone by, a forgotten era of oppressive book shelves, endless archives, dull lighting, and study sessions conducted under the stern watch of a spectacled librarian.

But like many other cultural icons and institutions, libraries have had to evolve with the times and adjust themselves to new digital technologies and globalised ‘knowledge cities’.

Modern libraries are shaping the way we acquire knowledge and share learnings, and this is particularly evident at Melbourne’s Library at the Dock – a next-generation library and community centre that has become the centrepiece of Victoria Harbour in Melbourne’s Docklands.

Delivered by Development Victoria (then Places Victoria), Lendlease and the City of Melbourne, the Library at The Dock is well known for its high quality, sustainable and publicly accessible urban design. With more than 16,000 people visiting the centre every month and over 400,000 items loaned since its opening in 2014, the library has become the civic heart and soul of Docklands.

Chair of the City of Melbourne’s Knowledge City portfolio, Councilor Jackie Watts said the library has evolved into an engaging and exciting piece of community infrastructure.

“The crucial importance of the Library at the Dock in creating a sense of place cannot be overstated,” Cr. Watts said.

Library at the Dock clearly demonstrates that libraries are no longer merely places to quietly borrow books. They also perform a much more complex and necessary role today as readily accessible hubs for lifelong learning where the community can interact, share thoughts and ideas, explore news interests and develop new skills.

Event bookings and usage levels continue to rise for the state-of-the-art library, which offers traditional and digital catalogues, free wi-fi, creative editing suites, study areas, and a range of other spaces for hire.

For Development Victoria, the key focus for the project was to create a cultural, recreational facility that would enrich the local community at Docklands. General Manager of Precincts Simon Wilson said it was great to see such high quality, accessible, and sustainable urban design delivered on this prime piece of real estate on Victoria Harbour.

“The urban design setting was very important to us,” Mr. Wilson said.

“The library needed to be in a prime location, so that it could become a genuine community meeting space for all age groups.”

Combining modern cross laminated timber (CLT) technology with traditional timber use, the three-story building features reclaimed ironbark hardwood beams and columns in the indoor-outdoor space, while the promenade decking is made from local hardwood, recycled from the old wharf structure at Victoria Harbour.

“For me, the standout design feature – the wow-factor – is the staircase, which really showcases the CLT, a product that most Australians might not have seen before” said Mr. Wilson.