Melbourne Park is one of the premier sports venues in Melbourne. Since 1988, Melbourne Park has been home of the Australian Open, played each year in January.

Thanks to the $972 million Melbourne Park Redevelopment funded by the Victorian Government, Melbourne Park will remain the home of the Australian Open until 2036, providing the best facilities and amenities for players and fans alike, including three operable roof and air-conditioned arenas effectively weatherproofing the tournament.

The redevelopment of Melbourne Park aims to cater for the growing popularity of the Australian Open, and to establish Melbourne and Olympic Parks as an unbeatable sports and events precinct.

The project includes a strong emphasis on the comfort of patrons with more open space and shade, increased seating capacity, better connections to public transport and the city, and easier movement into and within the precinct. 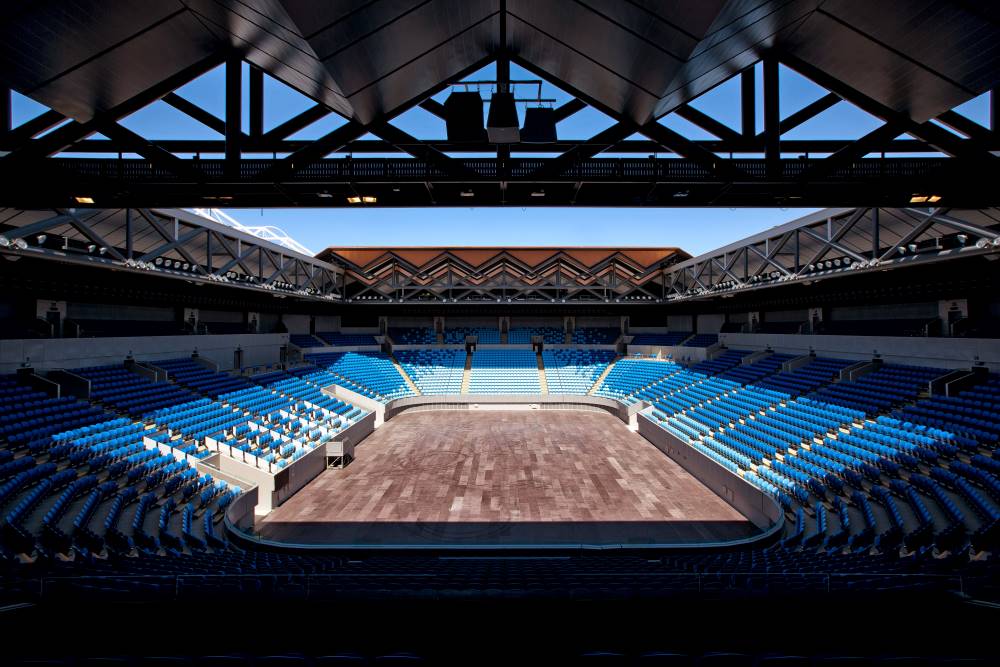 As part of the Melbourne Park Redevelopment, the southern section of the Tubular Footbridge linking the MCG with Melbourne Park has been removed earlier this year to allow construction works to get underway on Stage 3 of the project.

The bridge configuration was changed in early 2019.

The northern section of the MCG footbridge will remain open and continue to provide a pedestrian connection between the MCG and the Rod Laver Arena/Melbourne Park tram stop and Melbourne Park northern entrance.

The bridge is located between Rod Laver Arena and Melbourne Arena, connecting Melbourne Park to the southern end of the MCG concourse.

Leadership in Energy and Environmental Design (LEED) is the most widely used green building rating in the world.

Key initiatives implemented across the precinct include rainwater capture, recycling measures, energy efficiency, on site production, use of selected sustainable materials, waste reduction and public and alternative modes of transport.

Read more about our sustainability initiatives.

Melbourne Park is located on the northern bank of the Yarra River in the Melbourne Sports and Entertainment Precinct.

Tanderrum Bridge is the centrepiece of the $338 million Stage 2 upgrade of Melbourne Park.

'Tanderrum' is a welcoming ceremony by the people of the Kulin nations, featuring song, dance and cultural exchange, and providing safe passage for visitors on country. The name was chosen following a public naming competition.

Tanderrum Bridge will welcome hundreds of thousands of fans annually to the Australian Open - one of the world’s great sporting events - along with many other sport and entertainment productions throughout the year.

Was this page helpful?

Thank you for your feedback.

The $363 million Stage 1 of the Melbourne Park Redevelopment commenced in 2010 and was completed in time for the 2015 Australian Open.

As part of stage one, Margaret Court Arena had a major overhaul and now includes:

The $338.15 million Stage 2 of the Melbourne Park Redevelopment began in 2014 and was completed in September 2019, ahead of time and on budget.

Tanderrum Bridge provides a new primary entrance to Melbourne Park, and offers direct pedestrian access from Flinders Street Station. Works were completed in 2016, and the bridge was available for the 2017 Australian Open.
The bridge provides a safe route for fans to enter and exit Melbourne Park, ensuring they don’t have to cross Batman Avenue at ground level. It also reduces pedestrian travel time between Flinders Street Station and Birrarung Marr to under 10 minutes.
Tanderrum Bridge is a world-class addition to Melbourne Park, and was awarded the 2017 Melbourne Prize at the Australian Institute of Architects Victorian Awards event. Tanderrum Bridge also won the 2017 Premier’s Design Award for Architectural Design.

Watch the video documenting the construction of Tanderrum Bridge.

In April 2017, the Minister for Sport announced $271.55 million funding for Stage 3 of the redevelopment works.

The central precinct is the main element of Stage 3 and includes:
The old function and media centre was demolished in early 2019. Major construction is well underway and all works are due for completion in time for the Australian Open 2022.
Play Video

Since the Melbourne Park Redevelopment began in 2010, the project has had a focus on sustainability. The design places a strong emphasis on the comfort of patrons and users and uses clever initiatives to reduce its environmental impact.

Read more about our sustainability initiatives below.

A water harvesting system was installed in the first stage of the Melbourne Park Redevelopment. This includes an underground 4.5 mega litre storm-water retention tank.The system collects water from across the whole precinct. The system recycles the water for toilet flushing and irrigating the precinct’s green space areas.

The installation of the water harvesting system paired with energy-efficient design helped the National Tennis Centre to achieve LEED Gold® certification in 2013.

The National Tennis Centre has CO2 monitors in the carpark and uses enhanced natural ventilation.

Rod Laver Arena has been extensively refurbished with a focus on sustainability and patron comfort. An upgraded air conditioning system zones and adjusts the air temperature depending on the number of people in the venue. This improves patron comfort and reduces the electricity needed for running fans and cooling equipment.

Rod Laver Arena amenities have been upgraded to use recycled water for toilet flushing. CO2 monitors in the car park trigger the car park ventilation so it only runs when it is needed.

Tennis HQ is a long, narrow building designed so that it allows natural daylight to reach almost 100 per cent of the floor space. Giant eaves on each level reduce glare for the workers inside. The windows are double glazed.

The use of sustainable materials improves air quality in the building. Efficient mechanical and electrical systems are used with LED lighting and motion sensors to save energy. Lights turn off automatically if no one is using a zone. As in the other new buildings in the precinct, low-flow water taps and shower heads reduce the water usage in the building.

Photovoltaic (solar) cells are installed on the roof. They have been installed across the precinct where fixed roofing is available.

Margaret Court Arena reused an existing structure and upgraded it using sustainably sourced timber and energy efficient lighting and air conditioning systems. When the weather is fine, the operable roof can open and reduce the amount of air conditioning and lighting needed.

Centrepiece at Melbourne Park (Centrepiece) will also be using energy efficient lighting, electrical and mechanical systems and double glazing. The new function and media centre will be connected to the water harvesting system and use efficient water fittings. Photovoltaic (solar) cells will be installed on the roof to drive sustainable energy production. Centrepiece has created space for bike-parking facilities.

The redevelopment has focused on making more green space and shade in the precinct. New trees, garden beds and lawn areas make maximum use of the open space. Consideration of the comfort of pedestrians and event patrons has led the greening of outdoor spaces. While the number and size of the venues at Melbourne Park have increased, no green areas have been reduced.

The concourse design allows for more cyclists and pedestrians to move freely along the thoroughfares. New pedestrian bridges allow for direct pedestrian links to Flinders Street Station, AAMI Park and the MCG. Better connections to the city and public transport reduce the need for traffic coming to and from the precinct.