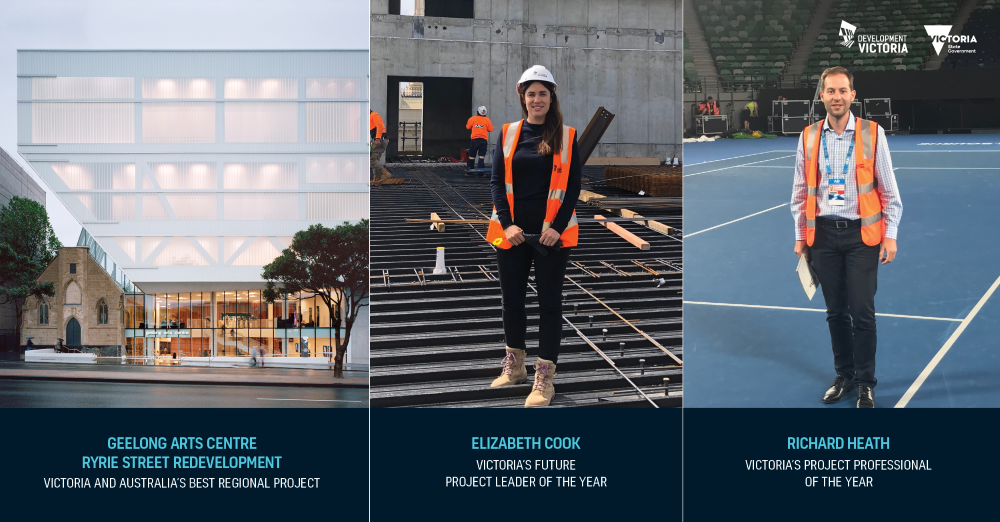 The Geelong Arts Centre Ryrie Street Redevelopment was awarded both Victoria’s and Australia’s Best Regional Project. “We are thrilled to be recognised for our work on the Geelong Arts Centre Redevelopment. I would like to thank our partners, Creative Victoria, Geelong Arts Centre and Regional Development Victoria as well as the design team lead by Hassell Architects and our construction partner Kane Construction,” said Angela Skandarajah, CEO Development Victoria.
“This project has provided world-class facilities and created business opportunities for local trades, suppliers and the arts community. The result is a stunning piece of infrastructure for Geelong that enhances its strong local and international cultural reputation.”

Project Manager Elizabeth Cook has been named Victoria’s Future Project Leader of the Year for her work on the Geelong Arts Centre Ryrie Street Redevelopment.

“This is a well-deserved accolade. Development Victoria is proud of the work Elizabeth has done and the leadership she demonstrated to deliver this important and beautiful piece of infrastructure for Geelong, meeting the project’s social and economic policy objectives,” said Ms Skandarajah.

“It's great to be recognised for my work on the Ryrie Street Redevelopment. It was such an interesting and beautiful project,” said Elizabeth Cook. “Thank you to AIPM and congratulations to all my colleagues at Development Victoria and our partners, all who made the project such a pleasure to work on.”

Richard Heath was awarded Project Professional of the year for his work on the Rod Laver Arena Refurbishment. “Richard’s commitment to quality outcomes and stakeholder relationships has been proven by the delivery of this iconic piece of state infrastructure, both on time and on budget. We are thrilled that he has been recognised for his project management expertise and effectiveness,” said Ms Skandarajah.

Project Director Richard Nash and the Rod Laver Arena Refurbishment and the State Library Vision 2020 project teams were also finalists in the awards.

Development Victoria works in partnership with the public and private sectors to design and deliver major cultural and recreational civic projects that enrich our communities and leave a lasting legacy. Economic benefits are created by designing infrastructure projects that create future commercial and job opportunities, as well as using local companies and expertise to deliver these projects.